Be My Captive Audience!!! 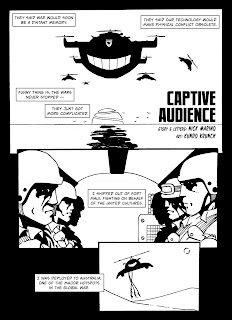 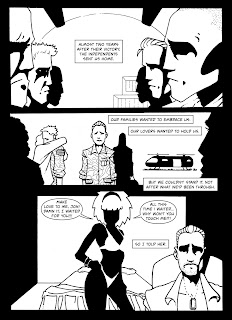 UPDATE 2: Check out this snazzy color version of Captive Audience that Kundo sent me a few months ago.

UPDATE 1: It looks like Kundo took the blog post down... but never fear!!! I've got a Captive Audience PDF right here!

What originally started as my pitch for 2000 AD's Future Shocks feature ended up becoming this awesome collaboration with artist Kundo Krunch! We worked this comic up as a submission to Mark Millar's new CLiNT magazine, but -- sadly -- Mark didn't pick us. "HE CHOSE... POORLY."

However, that means this story still needs a home! Kundo and I are looking for an anthology that would be a good fit for this twisted five-pager. Anyone interested should email me at nickmarino @ gmail dot com. Thx ahead of time for your interest!

In then meantime, Kundo's posted the five pages over on his blog, so go check it out and lemme know what you think!